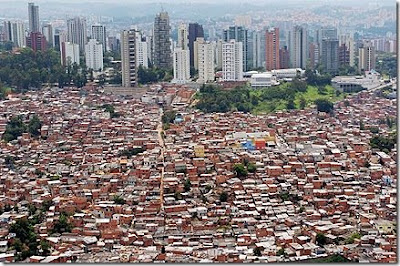 Socialist Worker interviews Mike Davis, one of the world’s leading writers on class, urbanisation and the environment

Your latest book charts the rise of slum living. How widespread is this phenomenon?

The United Nations estimates that more than one billion people live in slums. Slums are defined as urban areas of insecure tenure and substandard housing, lacking one or more crucial infrastructures such as electricity or sanitation.

This number will double within the next 15 or 20 years.

All future growth of the world’s population will occur in cities, 95 percent of it in cities of the Global South and the majority in slums.

But the urban poor are a much larger group than slum dwellers on their own – the total figure is at least two billion.

Given the level of urban poverty, why do people in the Global South move to cities?

People hunger for modernity and they gamble. Knowing full well that the odds are stacked against them, rural people, especially teenagers and young adults, will move to the city if they sense there is even a small chance of advancement and a new life.

Objectively, employment opportunity is sometimes actually worse in the city, and the cost of living is almost always higher. But educational opportunities are usually greater.

How do the lives of the new city dwellers differ from those in previous generations?

Aside from the sheer scale of modern slum life and urban poverty, what is novel is the structural and permanent disconnection of so many city dwellers from the formal world economy.

More than one billion people eke out a bare subsistence, or less, in the “informal sector” of Third World cities, as street vendors, domestics, ragpickers, beggars and the like.

So large areas of the world are seeing urban growth without real economic development?

Urbanisation, especially in Africa, has become disengaged from industrialisation, even economic development per se. The “push” factors expelling people from the countryside (such as agricultural mechanisation and the competition of foreign imports) now act independently of the “pull” factors attracting people to cities (such as job growth).

The 1980s were especially catastrophic. Third World debt and structural adjustment programmes pushed people out of the countryside into cities at the very same time that urban public sector and infrastructural spending were being decimated. Today’s “planet of slums” is largely an artefact of neo-liberal imperialism.

How do these developments shape the struggle against capitalism?

I think we must concede that revolutionary Marxism has underestimated processes of “absolute immiseration”. Today’s informal working class – the vast number of young city dwellers permanently cut off from hope of formal employment or residential security – is similar in some ways to the classical working class.

It wears, as Marx wrote, “radical chains” – it has no vested interest in the perpetuation of capitalist inequality. But unlike the industrial working class it is exiled from social production and the possibilities for self-organisation and culture presented by modern industry.

Across the world today I believe we are witnessing a search for new sources of power by the urban poor.

This is particularly true in Latin American countries, such as Venezuela, Bolivia and Argentina, where we have seen peripheral slum dwellers make brilliant use of their power to disrupt the commerce of the city, to mobilise the gods of chaos as allies.

But the political consciousness of the Latin American slum owes much to the presence of leading activists drawn from groups of deindustrialised workers – for example the former tin miners who moved to the Bolivian cities of La Paz and El Alto. They form the living memory of generations of class struggle.

In other situations, such as in Africa or South Asia, the Darwinian competition in the informal sector – with huge numbers of people crammed in a few survival niches – favours the rationing of livelihoods by ethnic or religious chieftains, corrupt politicians and phoney populists.

But even where these tendencies pushing groups apart seem most ingrained, we should not become fatalistic. The poor will not go quietly into the night – this is an urban world everywhere in upheaval and rebellion.

You have also been a prominent opponent of George Bush, who seems to be facing a deep political crisis at the moment. How much of this crisis is due to domestic factors and how much because of the war against, and the occupation of, Iraq?

Despite the near disappearance of the anti-war movement from the streets, and the treason of the Democrats – some, such as Hilary Clinton, are more hawkish than the White House – the occupation of Iraq has become deeply unpopular.

Little more than one third of those polled still support the president.

At the same time, the Bush coalition is decomposing internally as the Christian right antagonises secular Bush supporters, Republican traditionalists brawl with business proponents of cheap labour, and libertarians finally rebel against the Orwellian design of the homeland security legislation.

But Republican problems are not necessarily Democratic opportunities. The Democratic leadership’s major response to the crisis of the Bush White House has been to move even further to right in the hope of harvesting Republican votes.

Huge sections of the US electorate – from Latino immigrants to youth – are orphans of the two party system. Only 21 percent of the electorate voted in recent California elections, a historic low.

Immigration seems to be the one big issue in the US at the moment.

The truly seismic event in recent politics has been the emergence of a previously invisible immigrant working class as a public force. The immigrant rights demonstrations in April and May mobilised as many as four million people and were almost certainly the largest in US history, dwarfing even the monster anti-war protests of 1970.

The organisers were completely stunned by the outpouring in the streets of a dozen cities, as well as the near general strike in Latino neighbourhoods of California. The demonstrations were also remarkably diverse, with large Asian contingents in Los Angeles, a flamboyant Irish presence in Chicago and significant Muslim participation everywhere.

Progressive trade unions such as the service employees and the hotel workers, along with Spanish language radio celebrities and some religious leaders, played the key organising roles.

It would be a mistake to attribute this uprising simply to the bill threatening to make undocumented workers and their families into felons. Domestically, the “war on terror” has involved a radical erosion of the rights of all immigrants, legal and illegal.

Economic, judicial and political disenfranchisement have been fused together with an urgency that transcends many of the previous divisions between immigrant groups.

Historically, US radicalism, with the important exception of the black liberation struggle, recapitulates the revolt of immigrant workers – Germans and Irish in the 1880s, Slavs, Finns and Italians in the 1900s, Jews in the 1930s and so on.

As in Europe, a defiant new left – tremendously diverse in its ethnicities of origin – is emerging from these increasingly joined up battles against sweatshops, bad schools, border patrols and imperialist war.

The New Orleans tragedy sparked by last year’s hurricane seemed to be a major turning point in Bush’s fortunes. What has happened since?

The aftermath to Hurricane Katrina has been deliberate politically engineered ethnic cleansing in New Orleans and parts of the Mississippi Gulf Coast. Several hundred thousand working class black people, along with whole communities of rural Cajuns and Native Americans, have lost their homes and livelihoods.

As one angry Cajun friend put it, “The elites are trying to stomp out our goddamn souls.” Crocodiles tears have been shed, but there has been a shocking lack of serious response by trade unions and the black leadership in the US Congress to the murder of black New Orleans.

Locally there is a spirited fightback by militant neighbourhood groups and Acorn, a national organisation of blue collar homeowners, but there is no national movement.

The US situation, in other words, is complex and paradoxical. On one hand, the atrophy of anti-war protest as well as the absence of effective solidarity with New Orleans. On the other hand, extraordinary expressions of immigrant unity and militancy. The hope, as always, is that the new generation of the US left will quickly find unity and a national voice.